Ancient painting of the sixteenth century "Nativity" oil on 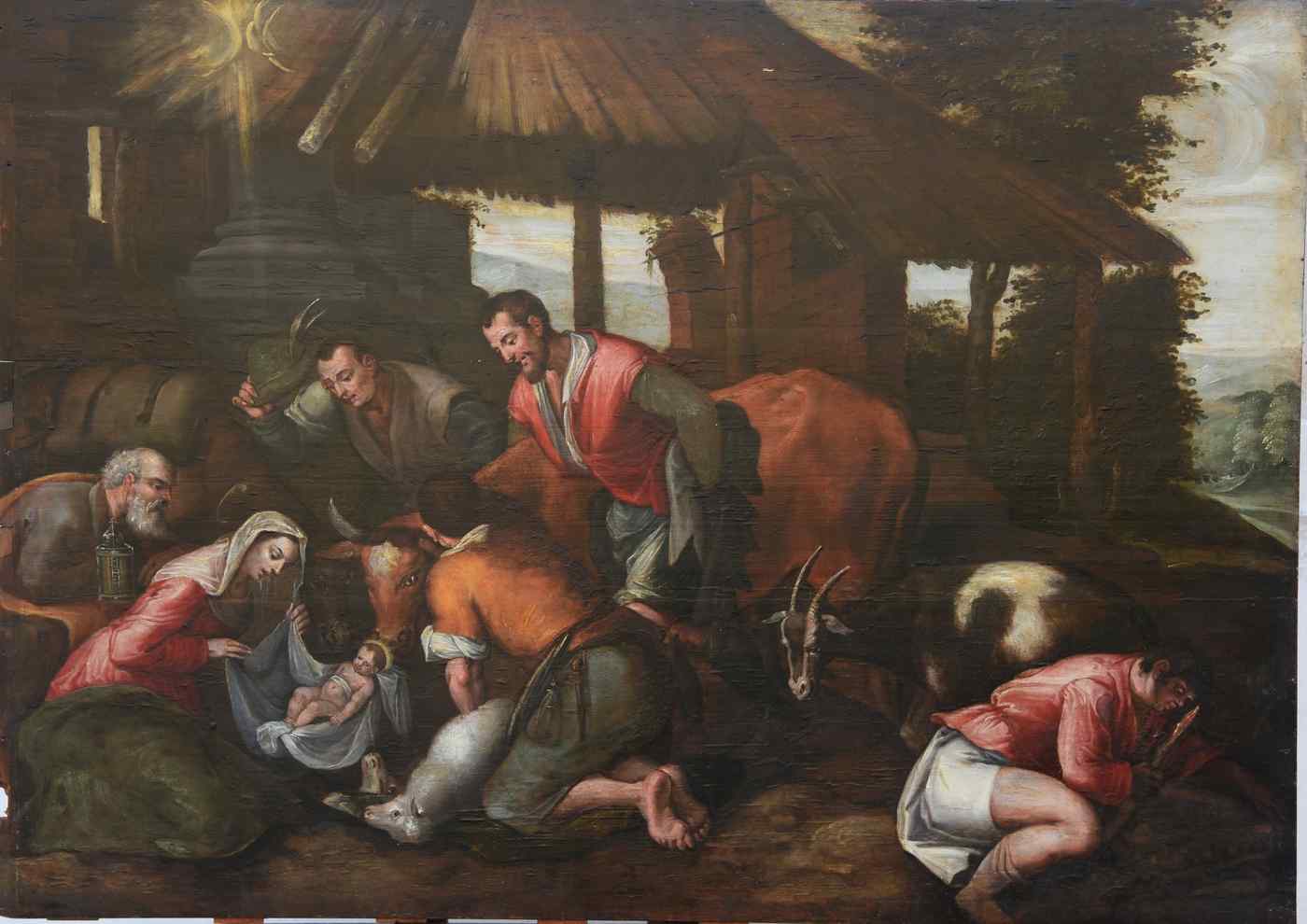 Antique painting of the sixteenth century of generous dimensions - Venetian school, circle of Jacopo del Ponte known as Jacopo Bassano. The painting executed on panel with the typical technique of the era, the figures are represented with bright colors, the recently restored and clean surface shows in many areas a thin craquelure resulting from natural aging. Jacopo Bassano He was born in Bassano in 1515 by the painter Francesco dal Ponte, later known as il Vecchio, and his first wife Lucia Pizzardini. He initially trained with his father, a modest artist originally from Gallio and the forefather of the family. According to Ridolfi's story, he then moved to Venice to learn the secrets of the trade in the workshop of Bonifacio de 'Pitati. Back home, he joined the family business, gradually taking on a leading role. In 1535 he created three large canvases for the public Palace of Bassano, depicting Christ and the adulteress, the three children in the fiery furnace and Susanna and the Elders, in which the master's influence is combined with a careful rendering of naturalistic data and influences emerge of Tiziano and Lorenzo Lotto. Between 1535 and 1540 he approached the plasticity of Pordenone. From this period are the Samson and the Philistines, now in Dresden, and the Adoration of the Magi, today at the Burghley House. The lack of traces of movement has led to the supposition that he spent almost all his life in Bassano. In 1541 the municipal council granted him exemption from taxes, and from this it appears that he was the head of the family and that therefore his father Francesco had died. From the forties he approached Mannerist painting, especially that of Francesco Salviati; between 1540 and 1550 he executed the Martyrdom of Saint Catherine of Alexandria today in the Civic Museum of Bassano, the Beheading of the Baptist in Copenhagen, with sharp and tapered figures inserted in a rarefied scene, the Way to Calvary, where the landscape is taken from the German engravings, the Nativity of Hampton Court and the Rest during the flight into Egypt of Milan. In 1546 he married Elisabetta Merzari (+5 September 1601) from whom he had eight children: Francesco Alessandro (3 January 1547 - March 1547), Francesco Giambattista (7 January 1549 - 2 July 1592), Giustina (27 December 1551 - 22 July 1558) , Giovanni Battista (4 March 1553 - 1613), Benedetta Marina (21 March 1555), Leandro (10 June 1557- 15 April 1622), Silvia Giustina (17 April 1560) and Jerome (3 June 1566 - 8 November 1621). All the sons will become painters, as well as the nephew Jacopo Apollonio, son of Marina and Apollonio Apolloni. Between 1550 and 1560 he produced the Last Supper at the Galleria Borghese in Rome, in which he took up the luministic style of Tintoretto. He produced paintings in the family workshop, together with his children, until his death.