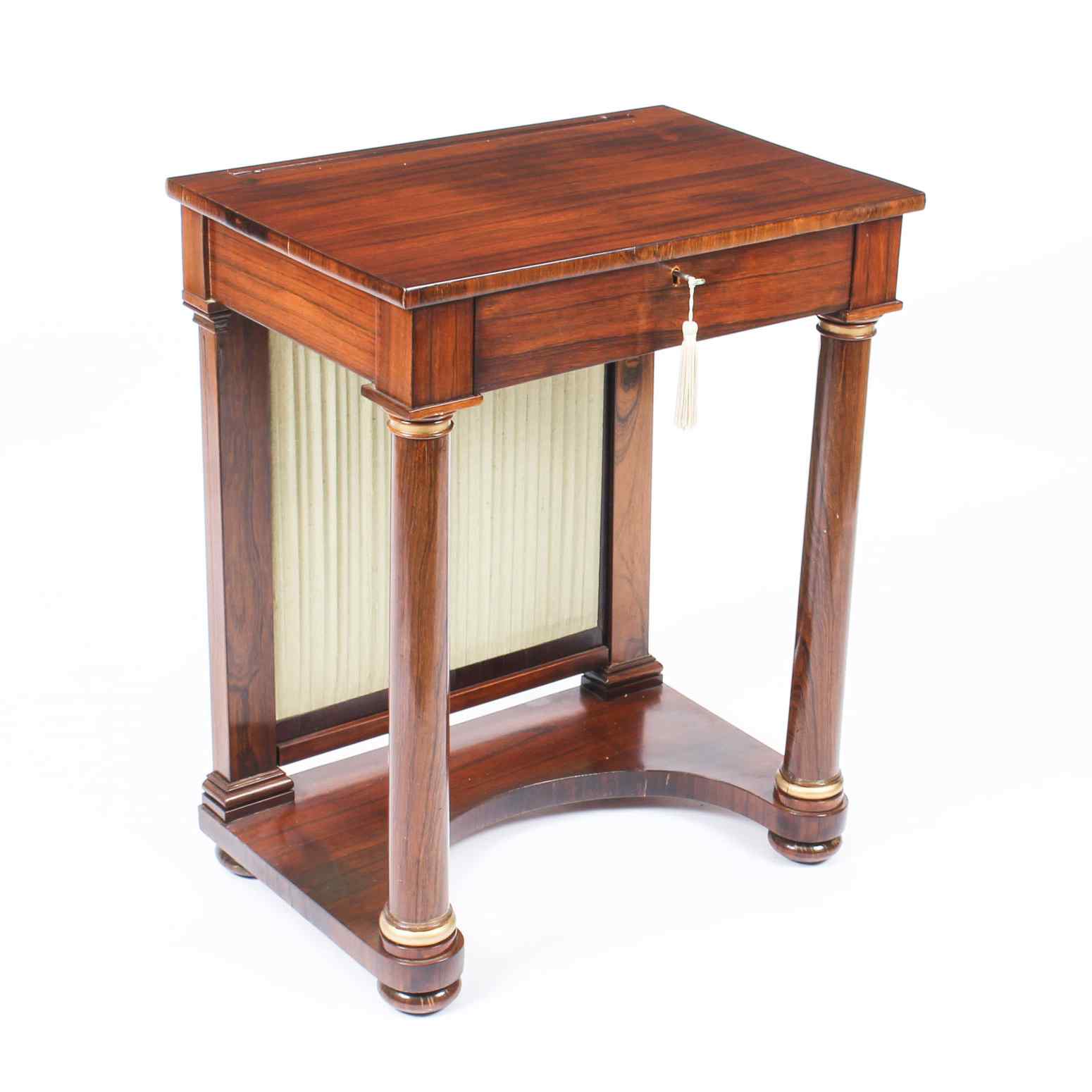 This is a beautiful small antique English Empire Gonçalo Alves console with integral writing slide and pen drawer, circa 1820 in date.

This dual purpose table has a drawer above a pair of elegant tapering columns with gilded mounts to the top and bottom, behind them is a pair of rectangular columns framing a framed fabric slide that lifts up when required. This screen serves as a modesty / privacy screen.

This piece has a single drawer with a writing slide with its original olive green leather writing surface over a pen drawer that can be pulled out from the side of the drawer whilst the writing surface is in use.

This gorgeous console table will instantly enhance the style of one special room in your home and is sure to receive the maximum amount of attention wherever it is placed.

Condition:
In excellent condition having been beautifully restored in our workshops, please see photos for confirmation.

Empire style,
is an early-19th-century design movement in architecture, furniture, other decorative arts, and the visual arts followed in Europe and America until around 1830.

The style originated in and takes its name from the rule of Napoleon I in the First French Empire, where it was intended to idealize Napoleon's leadership and the French state. The style corresponds to the Biedermeier style in the German-speaking lands, Federal style in the United States and to the Regency style in Britain. The previous style was called Louis XVI style, in France.

The Empire style was based on aspects of the Roman Empire. It is the second phase of neoclassicism which is also called "Directoire", after a goverment system.
Furniture typically had symbols and ornaments borrowed from the glorious ancient Greek and Roman empires.

The furniture was made from heavy woods such as mahogany and ebony, imported from the colonies, with dark finishes often with decorative bronze mounts. Marble tops were popular as were Egyptian motifs like sphinxes, griffins, urns and eagles and the Napoleonic symbols, the eagle, the bee, the initials "I" and a large "N."
Gilded bronze (ormolu) details displayed a high level of craftsmanship.

All items in the category: Antique Tables