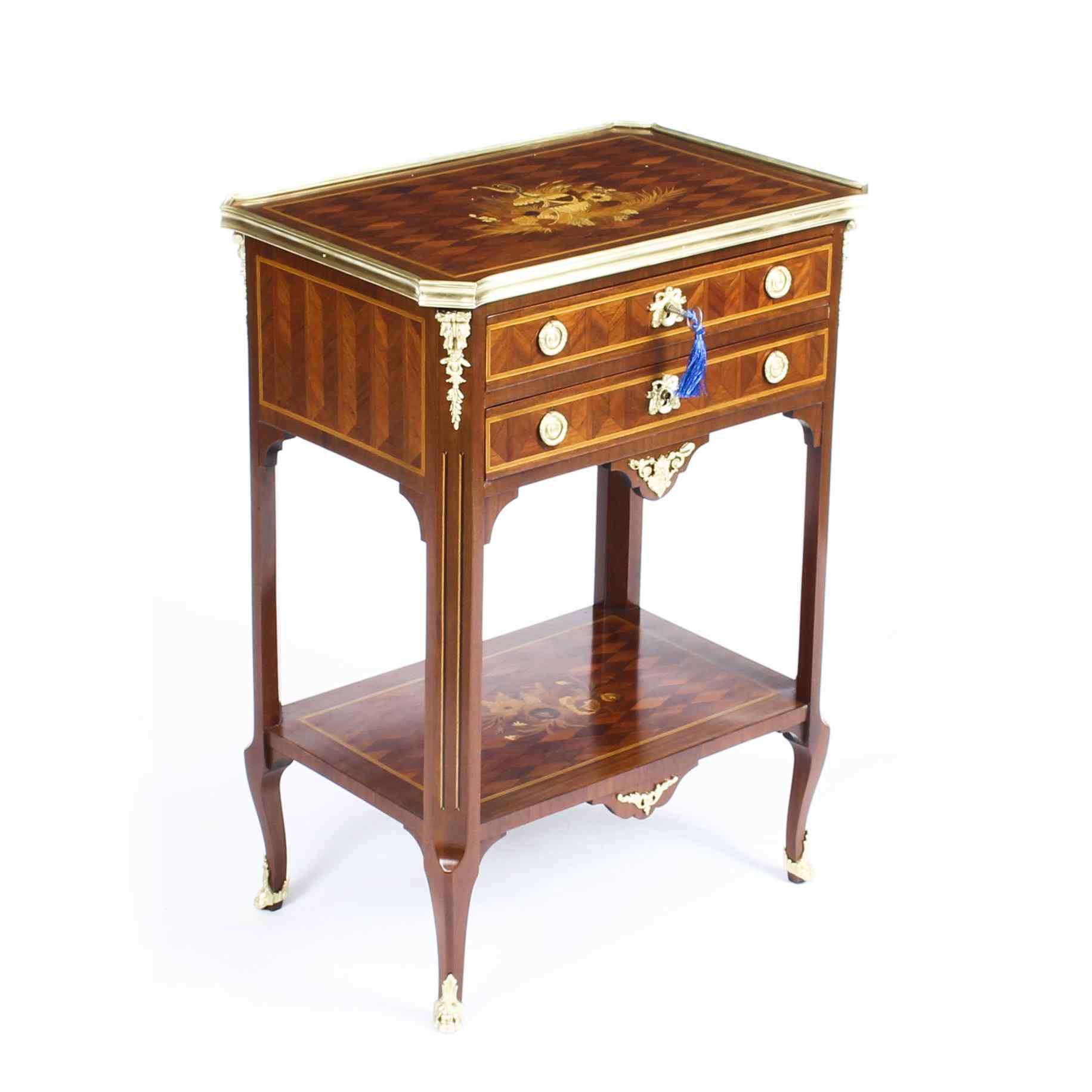 This is a beautiful antique French parquetry and marquetry ormolu mounted occasional work table or table en chiffonière in the Transitional style, circa 1870 in date.

Complete with working locks and key.

Add an elegant touch to any room with this lovely table.

Condition:
In excellent condition having been beautifully cleaned and French polished in our workshops, please see photos for confirmation.

The table en chiffonière is a type of furniture that appeared in France around 1750, as patrons sought to combine a sense of elegance and comfort in their daily furnishings. This kind of table typically included drawers that could be used to hold papers, jewelry, and chiffons or cloth, hence the table’s name . ormolubronze moulding around the top has been carefully made to allow the individual user to dash off small notes with comfort and ease.

Parquetry - is a geometric mosaic of wood pieces used for decorative effect. The two main uses of parquetry are as veneer patterns on furniture and block patterns for flooring. Parquetry patterns are entirely geometrical and angular—squares, triangles, lozenges.

The word derives from the Old French parchet , literally meaning "a small enclosed space". Large diagonal squares known as parquet de Versailles were introduced in 1684 as parquet de menuiserie to replace the marble flooring that required constant washing, which tended to rot the joists beneath the floors.

Such parquets en lozange were noted by the Swedish architect Daniel Cronström at Versailles and at the Grand Trianon in 1693. Timber contrasting in color and grain, such as oak, walnut, cherry, lime, pine, maple etc. are sometimes employed; and in the more expensive kinds the richly coloured mahogany and sometimes other tropical hardwoods are also used.


Marquetry
is decorative artistry where pieces of material (such as wood, mother of pearl, pewter, brass silver or shell) of different colours are inserted into surface wood veneer to form intricate patterns such as scrolls or flowers.

The technique of veneered marquetry had its inspiration in 16th century Florence. Marquetry elaborated upon Florentine techniques of inlaying solid marble slabs with designs formed of fitted marbles, jaspers and semi-precious stones. This work, called opere di commessi, has medieval parallels in Central Italian "Cosmati"-work of inlaid marble floors, altars and columns. The technique is known in English as pietra dura, for the "hardstones" used: onyx, jasper, cornelian, lapis lazuli and colored marbles. In Florence, the Chapel of the Medici at San Lorenzo is completely covered in a colored marble facing using this demanding jig-sawn technique.

Techniques of wood marquetry were developed in Antwerp and other Flemish centers of luxury cabinet-making during the early 16th century. The craft was imported full-blown to France after the mid-seventeenth century, to create furniture of unprecedented luxury being made at the royal manufactory of the Gobelins, charged with providing furnishings to decorate Versailles and the other royal residences of Louis XIV. Early masters of French marquetry were the Fleming Pierre Golle and his son-in-law, André-Charles Boulle, who founded a dynasty of royal and Parisian cabinet-makers (ébénistes) and gave his name to a technique of marquetry employing shell and brass with pewter in arabesque or intricately foliate designs.

Ormolu - (from French 'or moulu', signifying ground or pounded gold) is an 18th-century English term for applying finely ground, high-carat gold in a mercury amalgam to an object of bronze.The mercury is driven off in a kiln leaving behind a gold-coloured veneer known as 'gilt bronze'.

All items in the category: Antique Tables