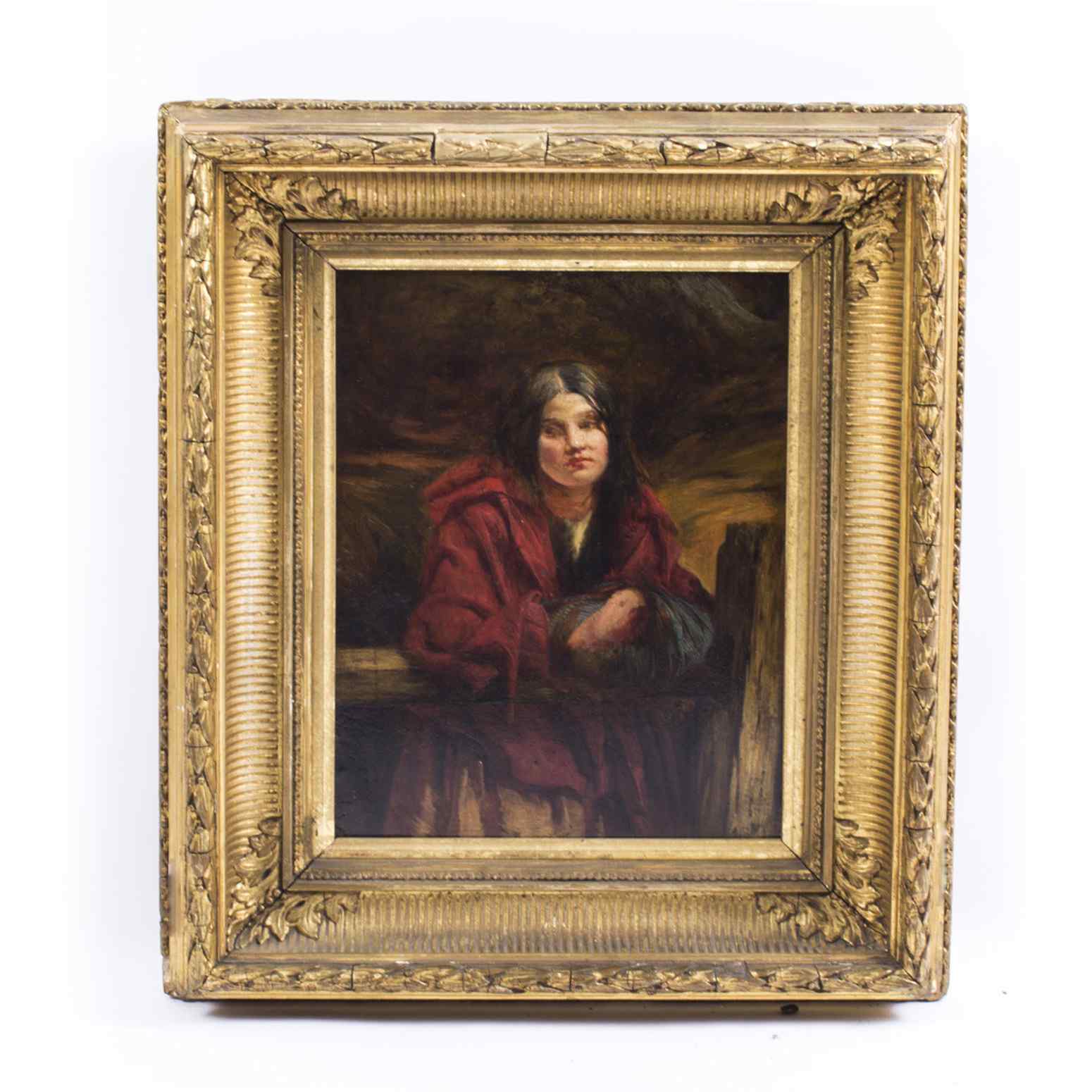 This is an antique oil painting by Robert Gavin, circa 1870.

It is signed on the back: R.Gavin RSA with a further inscription which is difficult to decipher.

It features a very nostalgic portrait of a peasant girl standing by a wooden fence.

Her clothes looks rather poor and she has got a very sad look in her eyes, maybe she was saying good bye to her loved ones and decided to watch them until they disappeared over the horizon.

After closer inspection one can see how skillful the artist was to capture all those feelings of sadness and loss on the canvas.

The painting has a beautiful giltwood frame which enhances the darker colours of the painting.

There is an ink stamp on verso "John D Smith Carver & Gilder, 33 West Register St Edinburgh", he was an established carver and gilder.

He was educated at the Leith High School, and when about twenty-one years of age he entered the School of Design in Edinburgh, and studied under Thomas Duncan.

He painted a large number of familiar and rustic subjects, mainly landscape compositions with figures of children, which became very popular. Some of these, such as the Reaping Girl and Phœbe Mayflower, were reproduced in chromo-lithography.

He was elected an associate of the Royal Scottish Academy in 1854. About three years later he appears to have become dissatisfied with his progress as an artist, and entered into partnership with a wine merchant; but after about a year he resumed the practice of his art.

He was a regular contributor to the exhibitions of the Royal Scottish Academy, and between 1855 and 1871 exhibited a few pictures at the Royal Academy in London. In 1868 he made a tour in America, and painted several characteristic phases of negro life. Soon after his return home he went to Morocco, and resided for some years at Tangier, where he painted numerous Moorish pictures. In 1879 he became an academician, and presented as his diploma work The Moorish Maiden's First Love, a damsel caressing a beautiful white horse; this picture is now in the National Gallery of Scotland.

He returned to Scotland in 1880, and continued to paint subjects of Moorish life and manners until his death, which took place at his residence, Cherry Bank, Newhaven, near Edinburgh, on 5 Oct. 1883. He was buried in Warriston cemetery.