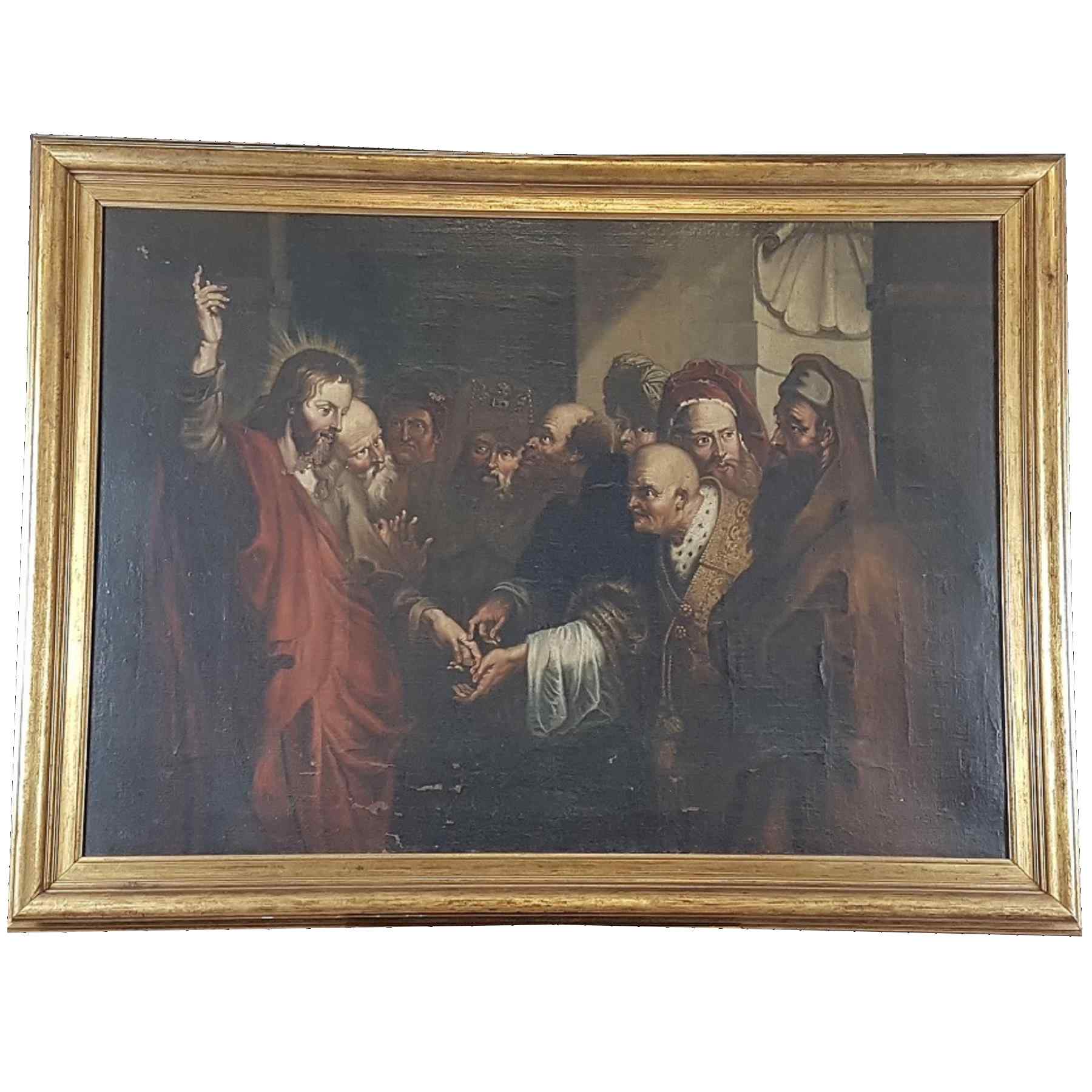 Important rare ancient oil painting on canvas high period full six hundred seventeenth century. Large in size and historical importance. Measures canvas 118 x 85 with frame 135 x 103. Non coeval frame. The original is an important painting by Rubens "The coin of the Tribute, 1612, at the Museum of San Francisco.As well known, Rubens was not only a skilled painter but he managed to run his business so as to create a workshop with productivity rhythms comparable to a real company, which often led to the production of copies of his works at the request of his clients who might be enchanted by one of his paintings or required copies in different formats to be exhibited in several homes. painted in Rubens but as clearly visible from the images on the front and by some small falls of color the canvas is perfectly placed in full seventeenth century of great pictorial quality and certainly to be attributed to an important client and to the circle of his followers. work of high period and important historical character ICONOGRAPHIC ANALYSIS The painter rappre hears "Caesar's tribute" a story of which there are more or less similar versions in different Gospels (Luke, Matthew, Thomas, etc.). Ex. From the Gospel According to Matthew: At that time, the Pharisees departed and held counsel to see how to get Jesus into error in his speeches. So they sent his disciples, with the Herodians, to tell him: «Master, we know that you are truthful and teach the way of God according to the truth. You are not in awe of anyone, because you do not look at anyone. So, tell us your opinion: is it lawful, or not, to pay taxes to Caesar? " But Jesus, knowing their malice, replied: "Hypocrites, why do you want to test me? Show me the currency of the tribute. " And they presented him with a money. He asked them: "This image and the inscription, who are they?" They answered: "Di Cesare". Then he said to them: "Render therefore to Caesar what is Caesar's and to God what is God's." STATE OF CONSERVATION The canvas has undergone a lining operation even if the original canvas is clearly visible on the front where there are some falls of color. In this phase of restoration, the frame was also replaced with a manufacturing frame of the early twentieth century that allows the sides to retension the canvas in case of need. The general state of preservation is good, only a few small falls of color are noticed, the most extensive in concurrence with the beard of Jesus. Such falls of color do not compromise absolutely important parts of the painting. Non-coeval frame.