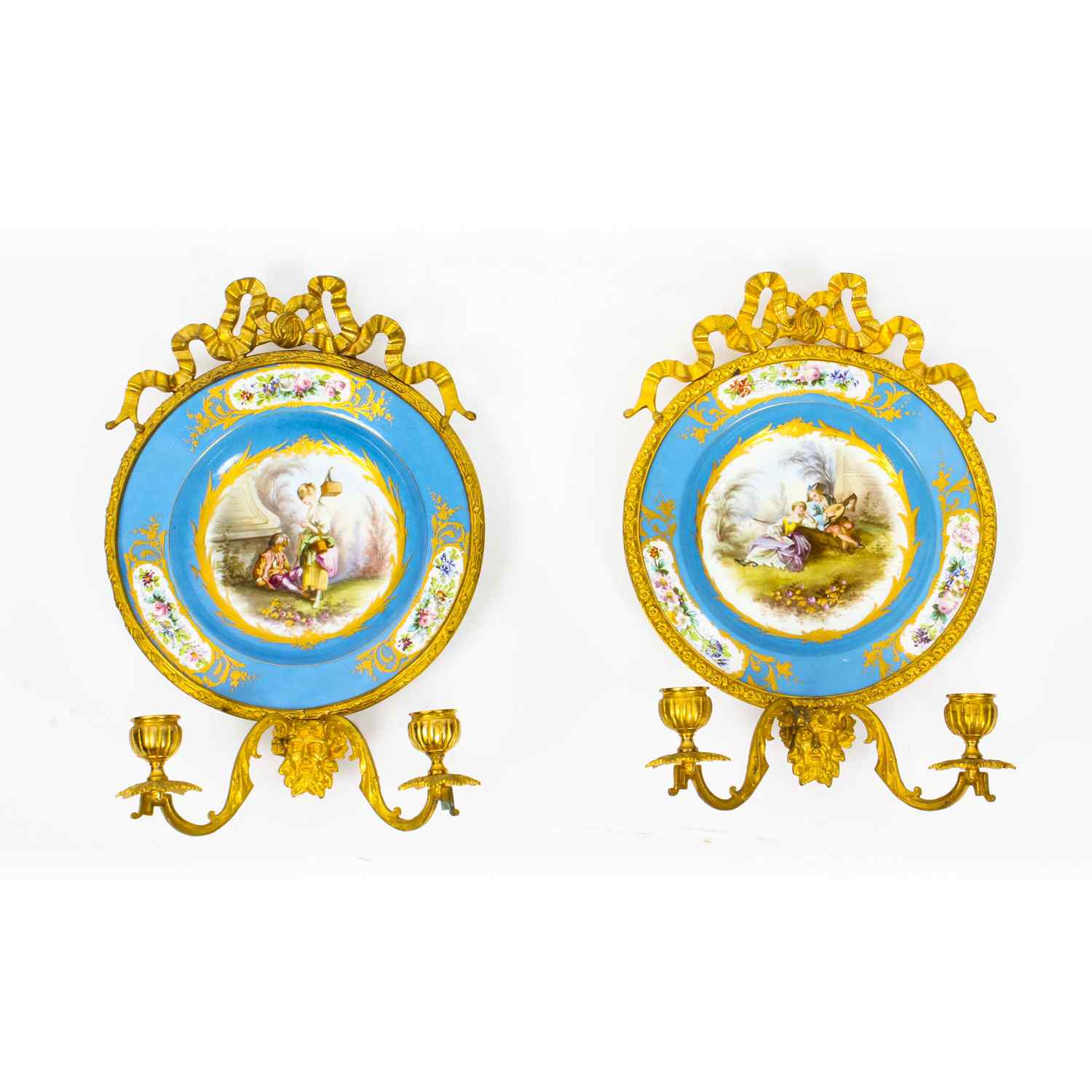 This is a stunning Antique pair of Sevres porcelain and ormolu wall lights, Circa 1870 in date.

They each feature an elegant classical frame topped with a ribbon crest with a satyr mask below and featuring upturned scrolling acanthus two branch arms with foliate cast sconces.

They feature inset hand painted porcelain panels depicting scenes of couples in Arcadian landscapes scenes each on a stunning bleu celeste ground with gilt highlights. On the reverse they bear the interlaced A's marks for Sevres and the printed marks 'S. 27'

There is no mistaking their unique quality and design and they will soon instantly enhance the style of one special room in your home.

Condition:
In really excellent condition with no chips, cracks or signs of repair, please see photos for confirmation of condition.

Sevres Porcelain
traces its roots in France to early craftsmen who had small manufacturing operations in such places as Lille, Rouen. St. Cloud, and most notably Chantilly. It is from Chantilly that a cadre of workers migrated to the Chateau de Vincennes near Paris to form a larger porcelain manufactory in 1738.

French King Louis XV, perhaps inspired by his rumoured relationship with mistress Madame de Pompadour, took an intense interest in porcelain and moved the operation in 1756 to even larger quarters in the Paris suburb of Sevres. Sevres was also conveniently near the home of Madame de Pompadour and the King's own Palace at Versailles.
From the outset, the king's clear aim was to produce Sevres Porcelain that surpassed the established Saxony works of Meissen and Dresden. Though the French lacked an ample supply of kaolin, a required ingredient for hard-paste porcelain (pate dure), their soft-paste porcelain (pate tendre) was fired at a lower temperature and was thus compatible with a wider variety of colours and glazes that in many cases were also richer and more vivid. Unglazed white Sevres Porcelain "biscuit" figurines were also a great success. However, soft-paste Sevres Porcelain was more easily broken. Therefore, early pieces of Sevres Porcelain that remain intact have become rare indeed.

The Sevres Porcelain manufactory always seemed to be in dire financial straits despite the incredibly fine works it produced. In fact, the king's insistence that only the finest items be created may have contributed to the difficulties. Only a limited number of European nobility could afford the extravagant prices demanded for such works. King Louis XV and eventually his heir, the ill-fated Louis XVI, were obliged to invest heavily in the enterprise. Ultimately, the Sevres Porcelain Factory produced items under the name of "Royal" and thus the well-known Sevres mark was born. King Louis XV even mandated laws that severely restricted other porcelain production in France so as to retain a near monopoly for his Sevres Porcelain. The king even willingly became chief salesman for the finest of his products, hosting an annual New Year's Day showing for French nobility in his private quarters at Versailles. He eagerly circulated among potential buyers, pitching the merits of ownership and policing the occasional light-fingered guest.
Sevres Porcelain may have indeed given the makers of Meissen and Dresden a run for their money by the end of the 18th Century but for the French Revolution. By 1800, the Sevres Porcelain Works were practically out of business due to the economic devastation of the new French Republic.

About the time when Napoleon Bonaparte named himself Emperor of France (1804), a new director was named for the Sevres Porcelain Manufactory. Alexandre Brongniart, highly educated in many fields, resurrected Sevres Porcelain. Soft-paste porcelain was eliminated altogether thanks to the earlier discovery of kaolin near Limoges. For four decades until his death, Brongniart presided over monumental progress for Sevres Porcelain, catering not only to Napoleon himself but at last to include the more financially profitable mid-priced market in the emerging middle class.

Ormolu (from French 'or moulu', signifying ground or pounded gold) is an 18th-century English term for applying finely ground, high-carat gold in a mercury amalgam to an object of bronze.The mercury is driven off in a kiln leaving behind a gold-coloured veneer known as 'gilt bronze'.

All items in the category: Antique wall sconces