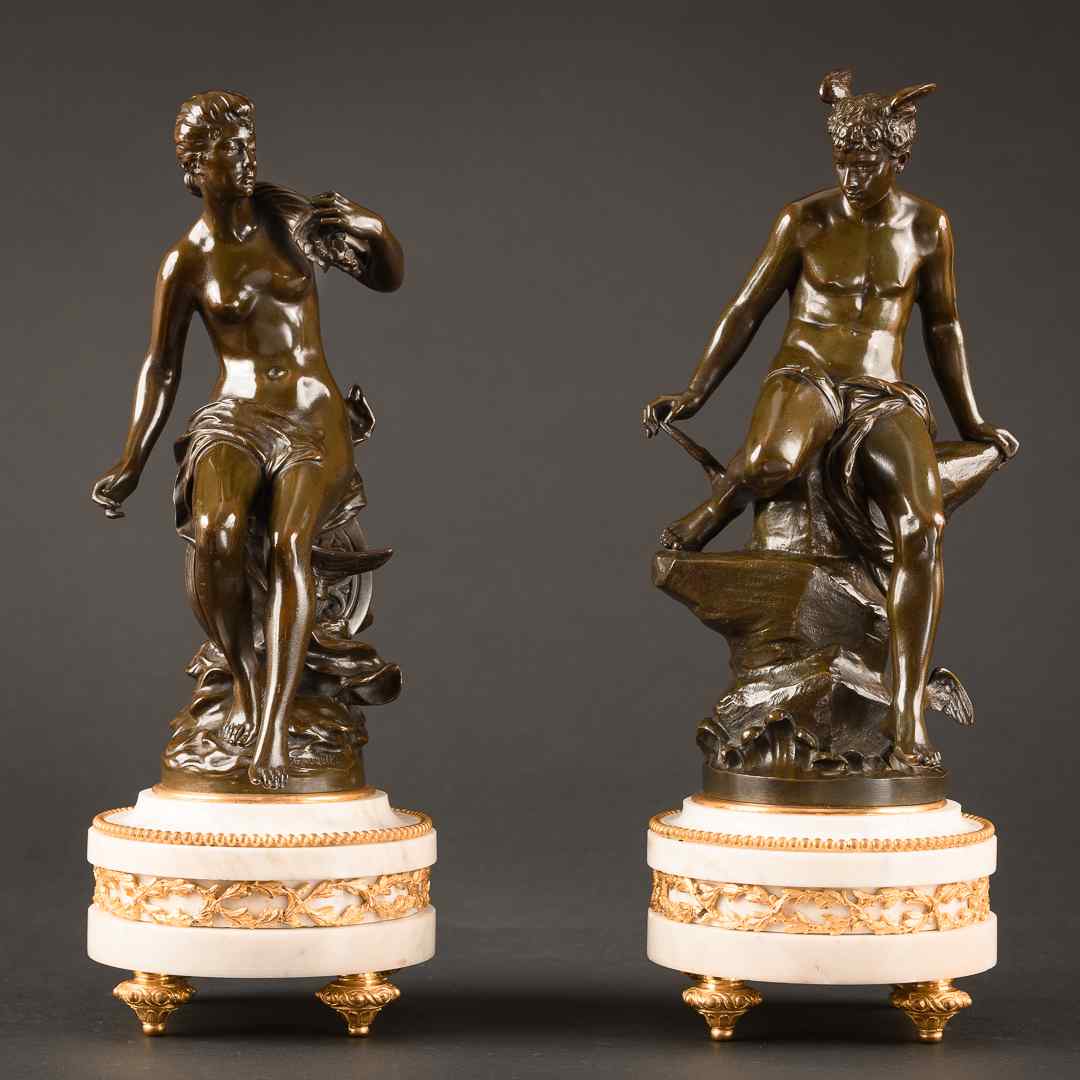 A refined pair of 19th century patinated French bronze sculptures with mythological figures representing the gods Mercury and Fortuna. They are mounted on a Carrara marble base with gilt bronze ornamentation and feet.

Mercury is the mythological god of commerce, messages and travelers. We recognize him by the wings on his ankles and his head. This sculpture is signed Eutrope Bouret (1833-1906). Fortuna is the goddess of good luck and fortune. We see her here sitting on the Rota Fortunae (wheel of fortune) and holding a cornucopia (horn of plenty). This sculpture is signed Henri Désiré Gauquié (1858-1927).

These antique French bronze sculptures of Mercury and Fortuna have a dark patina in very good condition.

Eutrope Bouret (1833-1906)
Eutrope Bouret was born on 16 April 1833 in Paris. He is the son of Charles-Louis Bouret, bronze fitter, and Catherine Rigaud, seamstress. Bouret was a pupil of Louis-Charles-Hippolyte Buhot. He began at the Salon of 1875 and obtained an honorable mention in 1885 with a marble statue representing Psyche in the court of Venus. Bouret continued to exhibit almost every year until 1903.

Henri Désiré Gauquié (1858-1927)
Henri Désiré Gauquié was born on 22 October 1858 in Flers-lez-Lille. He was a pupil of René Fache at the Académie de Valenciennes. Gauquié obtained a departmental scholarship which allowed him to continue his artistic studies at the École des Beaux-arts de Paris in the workshop of Jules Cavelier. In 1886, he obtained a third medal and a travel grant from the Ministry of Public Instruction and Fine Arts. After a year spent in Italy and Belgium, he returned to France and obtained a second medal at the Salon of 1890. He obtained a first medal at the Salon of 1895 for his marble group "Bacchante et Satyre", property of the City of Tourcoing.

Other items that may interest you from: Harold & Alex Beumer - Apollo Art & Antiques

All items in the category: Antique Bronzes