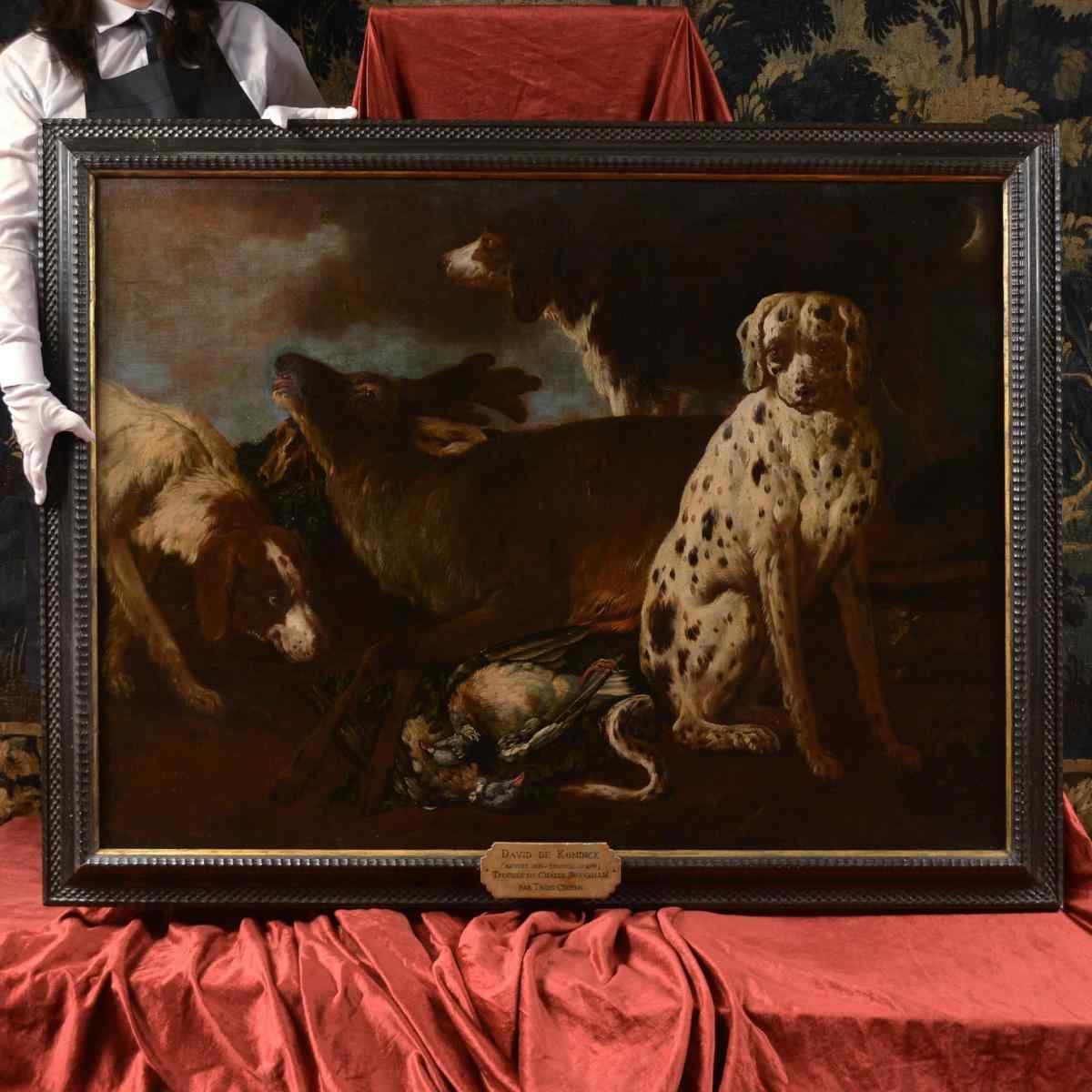 This oil painting on canvas by the painter David De Koninck (Anvers 1637 - Brussels 1687) entitled "Trophée de chasse surveillié par trois chiens" is presented to the general public of anticswiss and above all to the fine admirers of Dutch painting. in an elegant guilloche frame carved in black ebony wood.
The iconography of the work is part of the "still life" genre, pictorial specificity in which the Flemish painters were able to be true masters. We are at dawn in an apparently lake landscape, in the surroundings of Antwerp, three bloodhounds, one of whom is a Dalmatian, proudly watching their newly captured prey, a deer and two pheasants proudly displaying them to the viewer as a hunting trophy.

We are their master, it is to us who boast the capture of unsuspecting preys who, as losers, also enter by right into the great embrace of art history. The scene is framed in a timidly hinted landscape to which the references are the large portion of the sky that stands out in the upper left corner of the canvas and is articulated on spatial planes drawn by the positioning of the same animals.

The Dalmatian in the foreground, with an intense, penetrating gaze, is the "trait d'union" that unites our gaze with the scene that is unfolding behind him and introduces us to the scene; The other two bloodhounds seem to have been relegated by the painter to have a more marginal role in the composition than the Dalmatian and contribute to visually closing the scene in an ideal triangle, physically marking the territory of the booty just captured. One of the two bloodhounds perhaps scans the arrival of the master in the distance, turning our gaze outside the "fifth" of the painting and opening up to the portion of the sky.

The painter expertly lights the work with the use of shades of white to bring out in the foreground the very elegant Dalmatian spotted mantle and the two hounds that otherwise would remain in shadow and not very visible. The dark and earthy dominants prevail, interspersed with touches of red, as in the suggestive spill of blood from the mouth of the deer, as from blue strokes to the chromatic rendering of the plumage of the two pheasants. The intensity of the cornea of the animal's eye is touching, resolved with a strong red-colored stroke. The scene warms the warmth of the sky spread out like a pastel-colored veil used as an element of chromatic counterpoint that allows to extend the depth of the canvas and to let glimpse an over respect to the still and static scene of the first floor.

Origin: Flanders, Flemish school
Coming from a castle in Belgium, province of Limburg
Material: oil on canvas
Canvas size: 98 cm Height X 134 cm Length
Frame size: 113.5 cm Height x 148.5 cm Length
"DAVID DE KONINK (Antwerp 1636 - Brussels 1699)
TROPHEE DE CHASSE SURVEILLIE PAR TROIS CHIENS "By framing the work in the broader panorama of seventeenth-century Netherlands art, we can circumscribe it to what has been dubbed by art historians as" School of Antwerp ", a city that, starting from 500, was rich in commercial traffic and frequented by merchants and bankers who stimulated a lively financial activity. A cultured, cosmopolitan, culturally open bourgeoisie was formed, there is anxiety for scientific, geographical, medical and humanistic knowledge, many books are circulating. In the middle years of the seventeenth century Rubens is at the center of the political and cultural events of the city: he knew Jan Moretus, the most famous printer of Antwerp, and Nicolaas Rockox, mayor, politician and patron. It is no coincidence that these three men will leave their homes, now museums, to the city.

Biography of the artist David de Koninck (Antwerp, 1636 - Brussels, 1687) was a Dutch painter who specialized in still lifes and animals, was a pupil of Pieter Boel in Antwerp and was part of the Lukasgilde. He painted mainly dead and alive animals, fruit, flowers and still life in the manner of Jan Fyt. Travels to Germany, France and Rome in 1670 were profitable for his cultural education.

We would like to thank you again for the trust you have shown us over the years and we remain at your disposal for any further questions.

All items in the category: Antique Still life