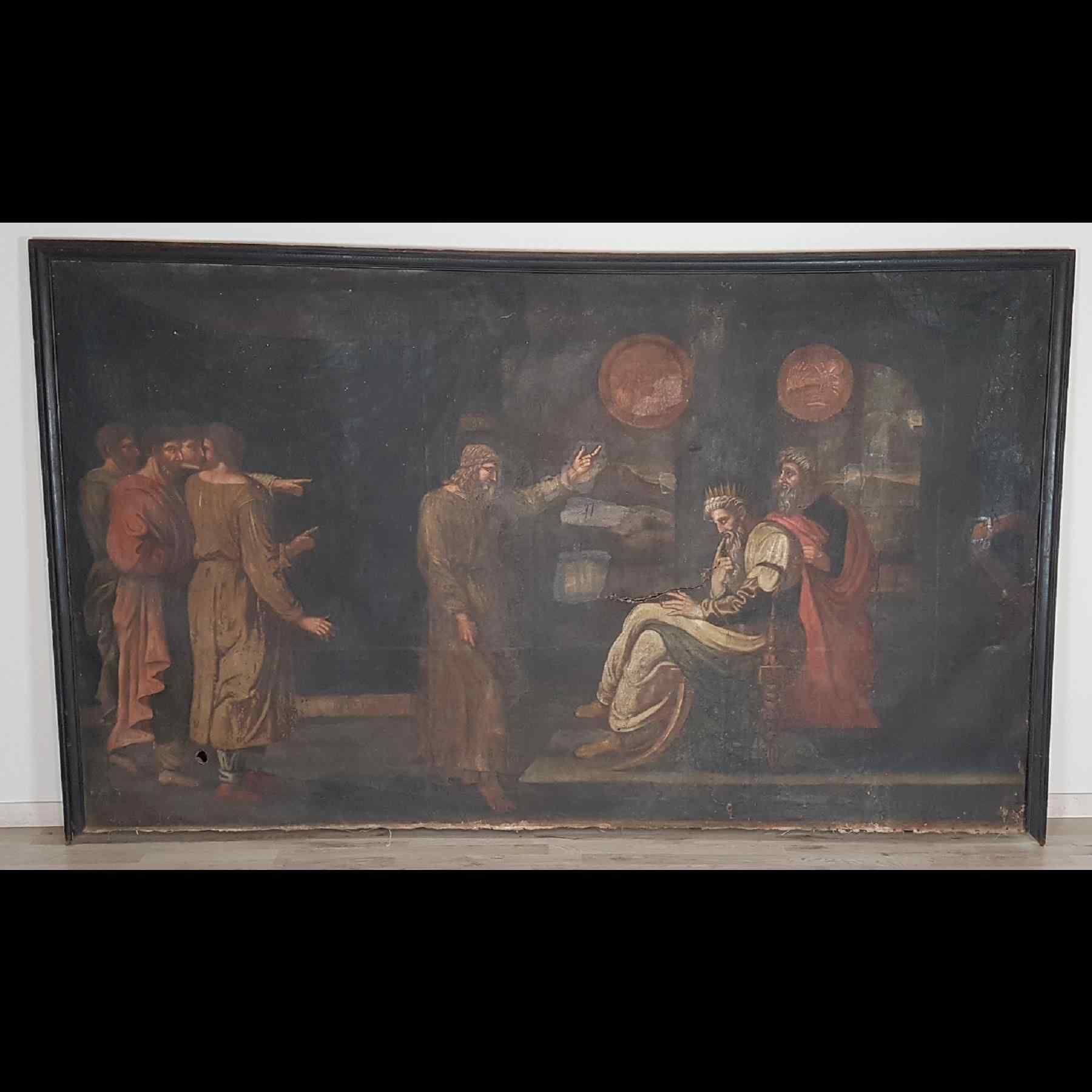 Work for sale of great importance. Large antique painting high era important dimensions 250 x 153 full 1600 Century XVII. Paintings of this size and importance were always executed on commission. The painting is taken from an important fresco of the Raphael very often happened at that time that important and capricious characters in seeing works of great masters of history commissioned as many important shops of similar replicas to show off in their homes. The images leave no doubt about the era of the painting that has come to us in the first canvas without undergoing any restoration except some cleaning attempts carried out on small pieces visible in the picture. Also of great importance is the original frame never replaced which still features the original seventeenth-century riveting. Entering into the detail of the representation, the artist represents an important and famous passage from the book of Genesis: "The dream of seven fat cows and the seven lean cows" The episode is part of the story of Joseph, Jacob's favorite son, who is sold as a slave to the envious brothers and ends in the prisons of the pharaoh. Here he begins to interpret the dreams of the inmates successfully, so the pharaoh calls him to court to interpret some of his anguished dreams. In the first of his dreams, the pharaoh dreams of being on the bank of the Nile: "and from the Nile came seven beautiful, fat-looking cows, and they began to graze among the reeds, and after those seven cows went up from the Nile, ugly looking and thin, and they stopped next to the first [...] But the ugly looking and thin cows devoured the seven beautiful and fat looking cows "The second dream is analogous to the first:" The second dream is analogous to the first: the pharaoh dreams of seven "big and beautiful" ears sprouted by a stem, and then seven burnt and empty ears, which swallow the first ones: Joseph interprets dreams as a divine message: there will be seven years of abundance throughout Egypt , followed by seven years of famine "As for the fact that Pharaoh's dream was repeated twice, it means that the thing is decided by God and that God is limited to following it." Joseph is not limited to interpretation, but also gives suggestions on how to handle the situation: the pharaoh do he would find "a clever and wise man" and put him at the head of a network of officials who take a fifth of all Egyptian products during the seven years of abundance, thus creating a reserve for the seven years of famine. The pharaoh will entrust the task to Joseph himself. In the painting for sale is depicted the crucial moment of the story when Joseph humbly in the presence of Pharaoh interprets his prophetic dreams, we see the pharaoh who thinks reflected on the words of Joseph while in the background inside two golden discs are depicted the two dreams. The painting as visible from the images needs restoration as it was kept in an important historical building but not inhabited for a long time the frame is incomplete. SHIPPING INSURED PACKAGING SUITABLE