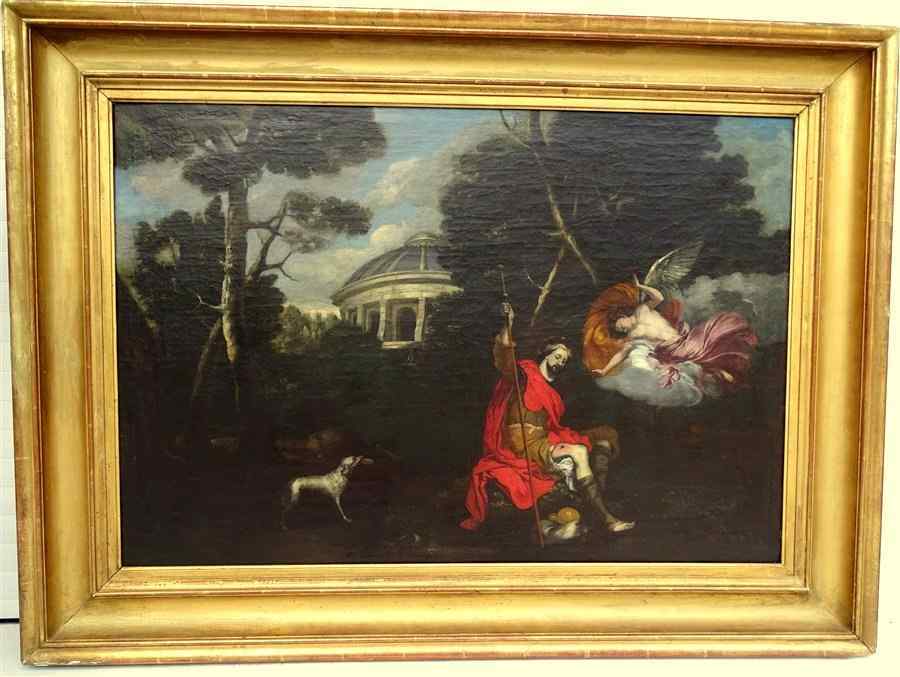 "Domenichino Circle ... Saint Roch School 17th Italian Baroque" Splendid Table, Italian School of the 17th, probably executed by the surroundings, or a follower of Domenico ZAMPIERI (1581-1641) Dubbed "THE DOMINIQUIN" representing Saint Roch Angel in a Mediterranean Park, perhaps in gardens and under the dome of St. Eusebia church in Marseille reflecting a Byzantine inspiration very fashionable at the time. In excellent condition. This large painting measures: 113 x 84 cm box (posterior part of the early nineteenth), 94 x 65 cm canvas. Dates were painted back in 1559, 1706? ... Dates that could be consistent with the plague epidemics of Marseille ... Shipping very neat accompanied by a Certificate of Authenticity and an Invoice. "Born in 1295, St. Roch was the son of a governor of Montpellier. His parents, older, obtained his birth by persevering prayer, promising to give God the child he would give them. He distinguished himself growing up . by a special hospitality thanks to the poor and travelers the death of his parents, he was 20, he decided to sell his property to be poor of Christ after the example of St. Francis of Assisi. he entered the Third Order, and, dressed as a pilgrim, he took the road to Rome, asking for alms. the plague raging in Italy, he devoted himself to the care of the poor and plague victims in contact, he had many healings. he lived there for three years without knowing its name or its origin. Achieved itself of the disease, he retired, dying in a shack of his country where a dog brought him every day a bun. miraculously healed, he returned to Montpellier as a stranger. he was imprisoned as a spy and died within five years after receiving the sacraments. We then recognized him. His cult became and remains popular throughout the Church. It is celebrated on 16 August. "Domenico Zampieri, said Domenichino, born October 21, 1581 in Bologna, died April 15, 1641 (59 years) in Naples, was an Italian painter of the Baroque movement. The son of a shoemaker, learning from Denis Calvaert in Bologna, the latter having surprised to copy prints of Agostino Carracci, drove him to his studio in 1595 and Domenichino found home with Agostino and Ludovico Carracci Academy in Bologna Incamminati, in the absence of Annibale Carracci who worked then in Rome. it is formed from them at Bologna, then on to Rome, where he collaborated with Annibale Carracci in the Farnese gallery. it was in Rome that he executed his first book: Adonis killed by a boar Shortly after he painted his picture of the Flagellation of St. Andrew, he wrote in rivalry with the Guide, and Communion of St. Jerome in Rome, where he remained faithful to. principle of his master Annibale Carracci, who did not allow more than a dozen figures in a composition. Domenichino then executed in Bologna Lady of the Rosary and the Martyrdom of St. Agnes; then he returned to Rome, where he produced new masterpieces. His success earned him powerful patrons, including Cardinal Aldobrandini, but rose against him an envious crowd. Called to Naples to decorate the chapel of the treasure in fresco, he wiped away in this city from its envious the most humiliating mortifications, poisoned and died there, according to some historians. They refuse to Domenichino have demonstrated invention; but it is placed, by its exact expressive drawing, by his true colors in the front row after Raphael, Correggio and Titian. especially estimated its fresco paintings. Admirer of the art of Raphael, his style continues in achieving altarpieces (Communion of St. Jerome, Pinacoteca Vatican) and frescoes (Villa Aldobrandini, Frascati, Life of St. Bartholomew and Nilo Abbey in Grottaferrata, Saint church -Louis-des-French, Rome), characterized by a calm and luminous evocation of Renaissance art. His contemporaries had nicknamed the Ox because of its slow and persistent work. The Louvre has many paintings of this master. His work was collected by Landon in 158 boards. Domenichino also succeeded in architecture and sculpture