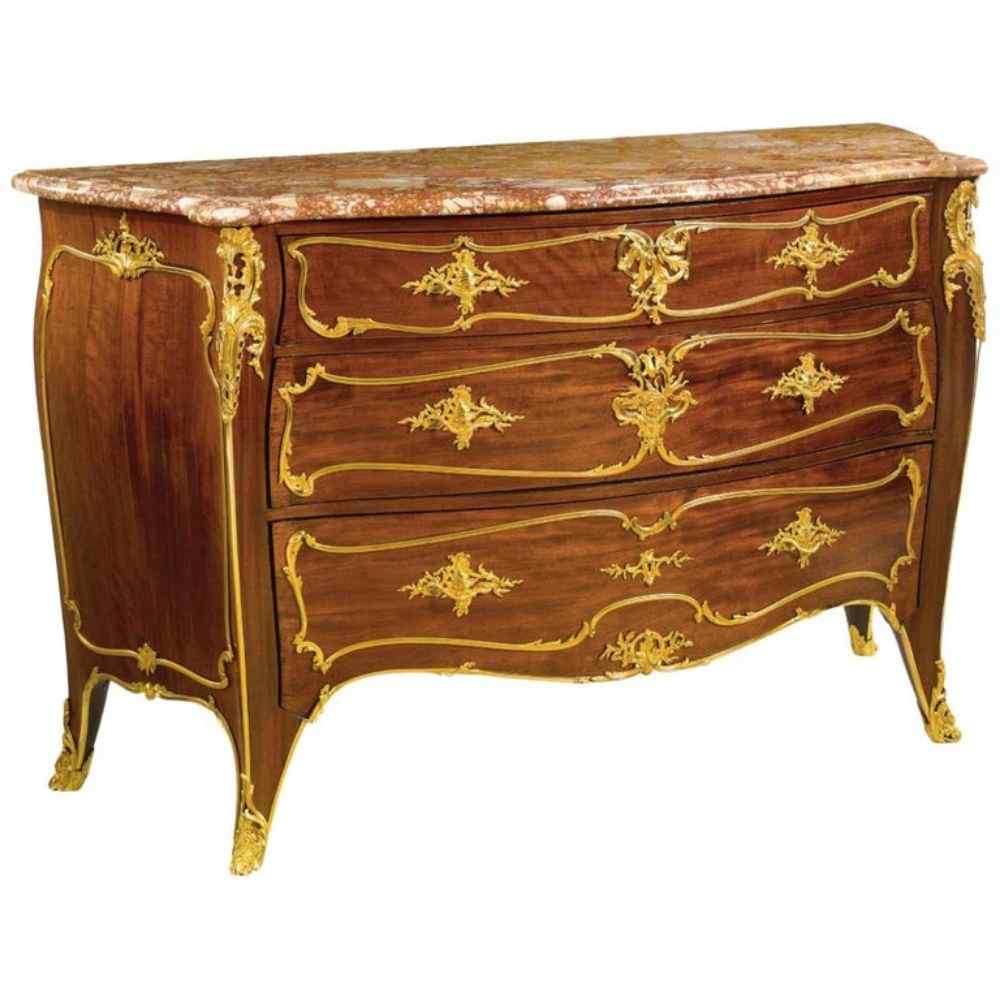 An Exceptional Louis XV style French ormolu-mounted mahogany commode by Joseph-Émmanuel Zwiener, Paris, circa 1885, the bronzes designed by Léon Messagé. With original marble top, the bombe shaped commode fitted with three long drawers, one chute has been removed to reveal the mark ZN from the bronze master model. Exceptional quality. Very gorgeous commode. Measures: 37" high x 62" wide x 24" deep Joseph Emmanuel Zwiener was born in Heidau, Snesia, circa 1848 and died in 1925 and was one of the leading furniture makers of the end of the nineteenth century. At that point, the Paris workshop appears to have been taken over by another important emigre and ebiniste Francois Linke. It is thought that the sculptor Leon Message who originally worked with Zwiener may have transferred to Linke’s workshop when Zwiener ceased trading in Paris in 1895. Zwiener almost certainly employed François Linke, who was six years younger and a fellow German-speaker. The Pankraz Gedenkbuch mentions Linke as "working in Paris with a German master. In 1895 his Paris workshop was taken over by the important émigré and ébéniste, François Linke. Christopher Payne, in his book on Linke, speculates that Linke may have worked for Zwiener when he first arrived in Paris in 1875. Linke is known to have also taken on Zwiener's sculptor Léon Messagé. For this reason many of Zwiener's pieces have often been mistakenly attributed to Linke. The high quality of the ebenisterie and the gilt bronze mounts are characteristic of Zwiener’s work. As Mesange worked for Linke and Zwiener in the same style, many of Zwiener’s pieces have been attributed to Linke. In order to differentiate commissions, the bronzes were often marked on the reverse side with the maker’s initials. In 1889, the firm won a Gold Medal at the Exposition Universelle for a Jewel Cabinet. The jury noted “es ses debuts a une Exposition Universelle (il) s’est mis au premier rang par la richesse et le fini de ses meubles incrustes de bronze et fort habilement marquestes”. In 1898, Julius Zwiener was commissioned to make an important bedroom suite for Kaiser Wilhelm II.


All items in the category: Antique Chest of Drawers