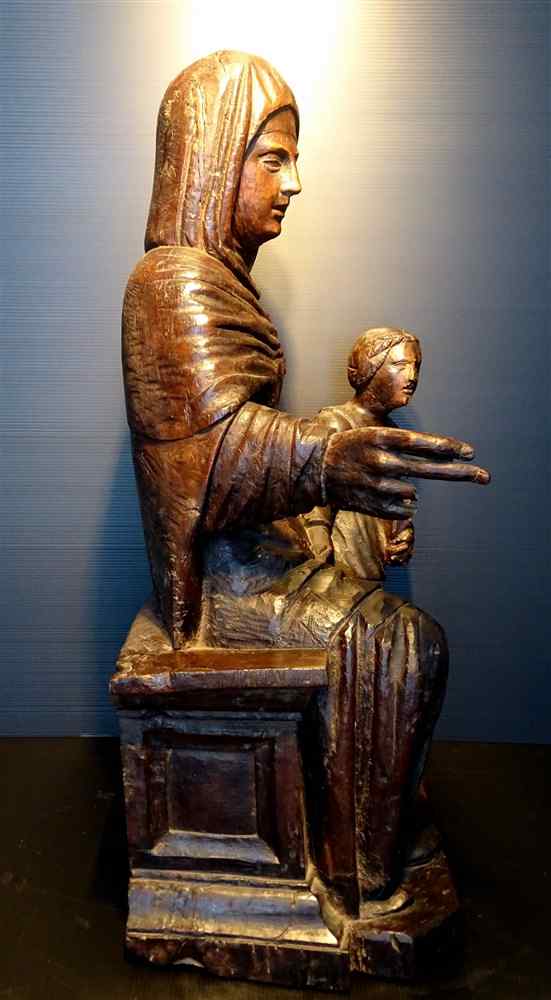 Saint Anne in Sedes Sapientae 16th century Statue in Walnut of the 16th century (Block). Saint Anne is represented in "Sedes sapientae", she sits, she therefore serves as "throne" to "wisdom", the head covered with a gimp, dressed in a dress, feet resting on a pedestal. The Virgin is represented, relative to her mother, as a teenager; she is not crowned, her hair is short, she puts on a coat and wears foals: she holds in her left hand a closed book. This book, a symbol of the transmission of knowledge, of tradition, but also of the Scriptures, that is, of God's design for his people (Old Testament). Unlike other groups, Anne remains outside this field of interaction, which she is content to frame. His manly look, almost amused, very human, does not detract from the hieratic character of his posture and the geometrical figure of his seat, pre-Christian symbols of primordial Maternity: these are the characteristics of the Indian Yakshini as matronae or Gaulish masters (often grouped by three), figures of motherhood (holding one or two children) or abundance (holding a basket of fruit). In very good condition of age and use, Phalanx missing, some cracks, it measures: h: 67 cm, l: 36 cm, p: 25 cm, weight + - 15kgs, Shipping very neat by specialized carrier, accompanied by a Certificate of Authenticity and an Invoice. Participation in shipping costs for France: 80 €, other countries of the world: thank you for requesting a quote.


All items in the category: Wood sculpture