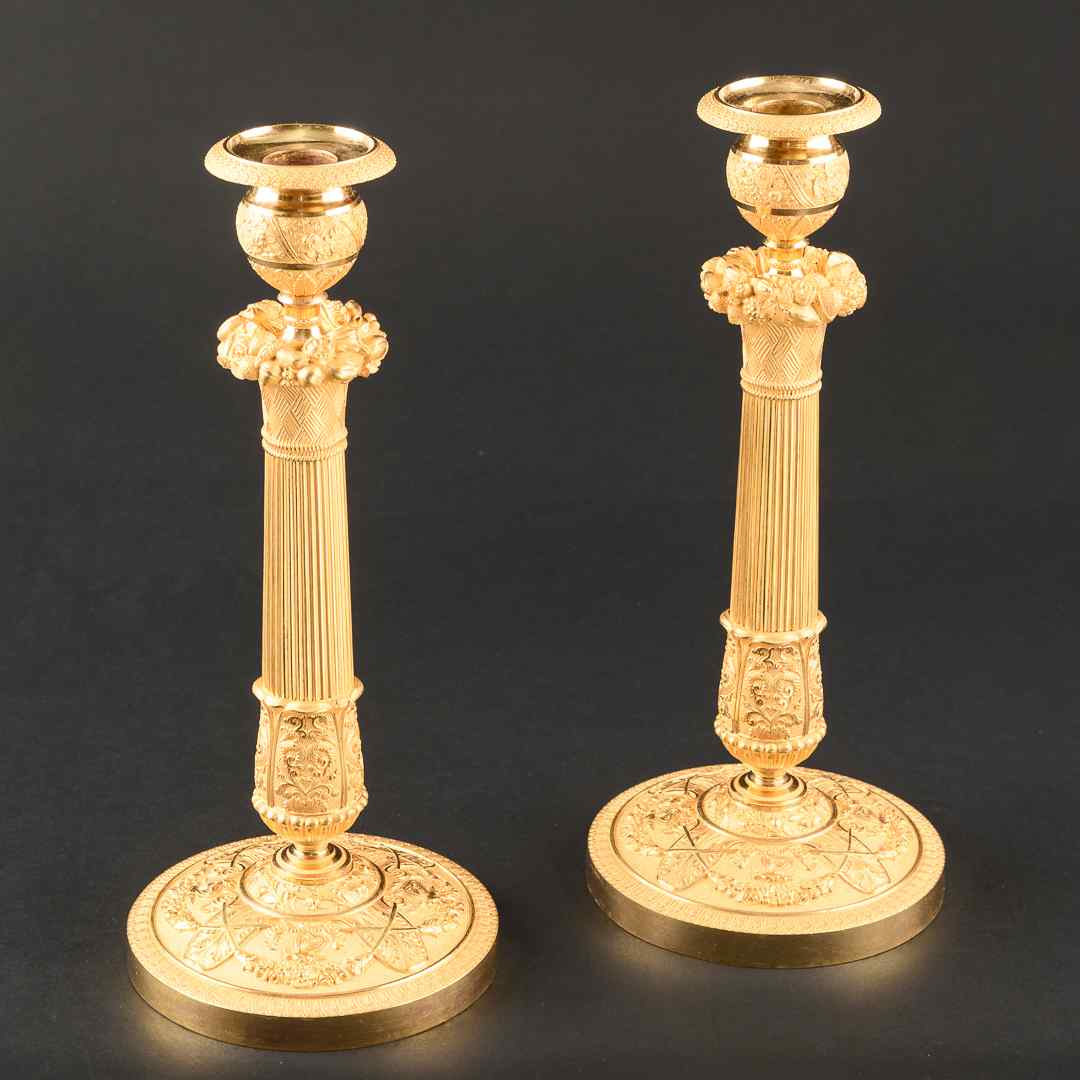 This extremely rare large pair of Empire French candlesticks signed Galle has many rich decorations, all of them magnificently carved. The quality of the carving of this exceptional pair of French candlesticks shows you it is the work of a great bronze master. This pair of candlesticks carries the stamp “G F” (see last photo). It is the mark of the very famous bronzier Gérard-Jean Galle (1788-1846). He was the son and successor of the top bronzier Claude Galle.

The bobeches have a refined flower decoration. And below them we see an intricate pattern of flowers and leaves. The top part rests on a basket filled with fruit, flowers and leaves, while the basket itself consists of a finely carved wicker work. Down on the base we see decorations of butterflies foraging on flowers.

Everything about these remarkable candlesticks radiates an impression of greatness, not only the quality of workmanship but also the bigger than usual dimensions.

These French candlesticks signed Galle have been executed in mercury gilded bronze with a sublime original mat and shiny gilding. They are in a very good condition.

Gérard-Jean Galle (1788-1846)
Gérard-Jean Galle, who was the eldest son of the renowned bronzier, Claude Galle (1759-1815), took over the family business at rue Vivienne on his father’s death. Soon he proved that he could maintain its excellent repute. Regarded as one of the best in Paris, he was patronised by an elite clientele. His clientele included the duc de Richelieu, the marquis de Martel and viscount de la Rochefoucauld. Gérard-Jean and his younger brother, Jean-Auguste, trained under their father but then joined the army after completing their apprenticeship. Gérard proved a brilliant soldier and he received a knighthood in 1815. In 1810 Claude Galle requested from the Emperor his sons’ leave of the army so that they could run the family business.

In 1815 Napoleon lost his power and Claude Galle died, leaving Gérard’s stepmother in temporary charge. Soon after this Gérard-Jean returned home and took over the family business. Later, in 1819 Gérard won a silver medal at the Exposition de l’Industrie for an outstanding collection of bronzes consisting predominantly of light fittings and clock cases. The latter he supplied to some of the best Parisian clock makers including Bourdier. Gérard-Jean Galle also specialized in making clocks with corresponding candelabra, of which at least two are at Stockholm Castle.

We send this article worldwide, professionally packaged, with registered and fully insured shipping at a fair price.

Other items that may interest you from: Harold & Alex Beumer - Apollo Art & Antiques

All items in the category: Antique candlesticks