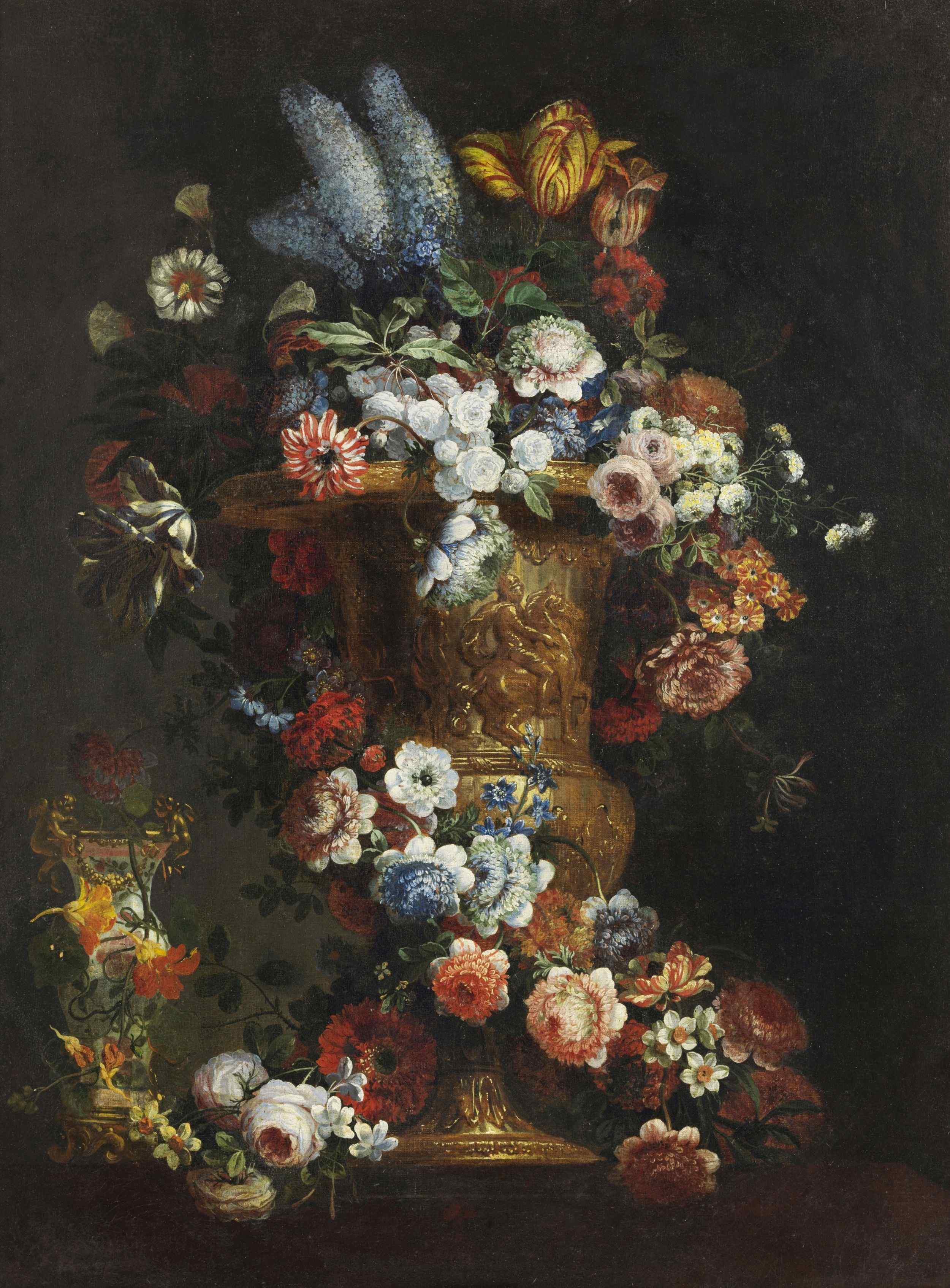 Gaspar Peeter Verbruggen the Elder, a celebrated Flemish flower painter, had other children, but only his namesake descendant, Gaspar Peeter the Younger, earned a place in European art history.

Raised in his father's workshop, ours devoted himself to the same pictorial genre but, unlike his parent, a hardworking and irreproachable character, he led a senseless and wasteful life that led him to ruin, so much so that in 1703 all his assets were put to the ' auction and in 1705, pursued by creditors, he had to flee to Holland in the company of his partner at the time.

Refuged in Amsterdam, he was soon banished from that city too and took refuge in the Aja where he remained at least until 1723 collaborating with Matteus Terwesten who, like his brother Esaias, had lived in Rome at the end of the previous century. Perhaps due to this working commonality, which could have influenced his style, many commentators believed they saw an Italianizing affinity in the works of Verbruggen and postulated a trip to the peninsula which, however, is not attested by any historical document. The presence of signatures such as "Gasparo Pedro Verbruggen" seem more a tribute to the legacy of Spanish domination than to Italian culture.

Most of his known works are centered on the representation of magniloquent vases filled with flowers in turn surrounded by other flowers arranged in a garland or simply placed at the base; the vases are sometimes placed on squared stone shelves or on column bases, inserted in classical architectural contexts, in niches or, more rarely, against dark backgrounds as in the case we are examining.

Despite a very characteristic iconographic continuity, in Verbruggen's production it is possible to identify a youthful phase, still of seventeenth-century inspiration, tending to have a neutral background or with few visible elements, centered on strong chiaroscuro contrasts and a more distinctly eighteenth-century phase, strongly illuminated, with vases inserted in architectural complexes made of fluted or round columns, plinths and architraves or even blue skies furrowed by white clouds.

Even if our painting belongs to the production of the late seventeenth century, some characteristics that the canvases of the following period also share cannot be overlooked, such as the grandeur of the central vase, the manufacture of the roses, their proposition in pairs and the solid fleshiness of the tulip petals. .

His abundant production reveals an artist with more pagination than his father especially in mature works when he breaks away from traditional stylistic features and enhances his compositions by enlarging petals and corollas beyond the limit of nature, abounds in the choice and combinations of colors, inserts fruits and animals; these additional variants denote an adaptation to the decorative taste of the new century.

The paintings and works of art published here are my exclusive property and therefore are always available to be viewed, by appointment, in my exhibition sites located in Sanremo and Brescia.

This item , like all our objects, is sold accompanied by a photographic certificate FIMA of authenticity and lawful origin; this document identifies the object by adding more value to the article.
We take care and personally organize the packaging and shipping of our items with insurance all over the world.

All items in the category: Antique Still life