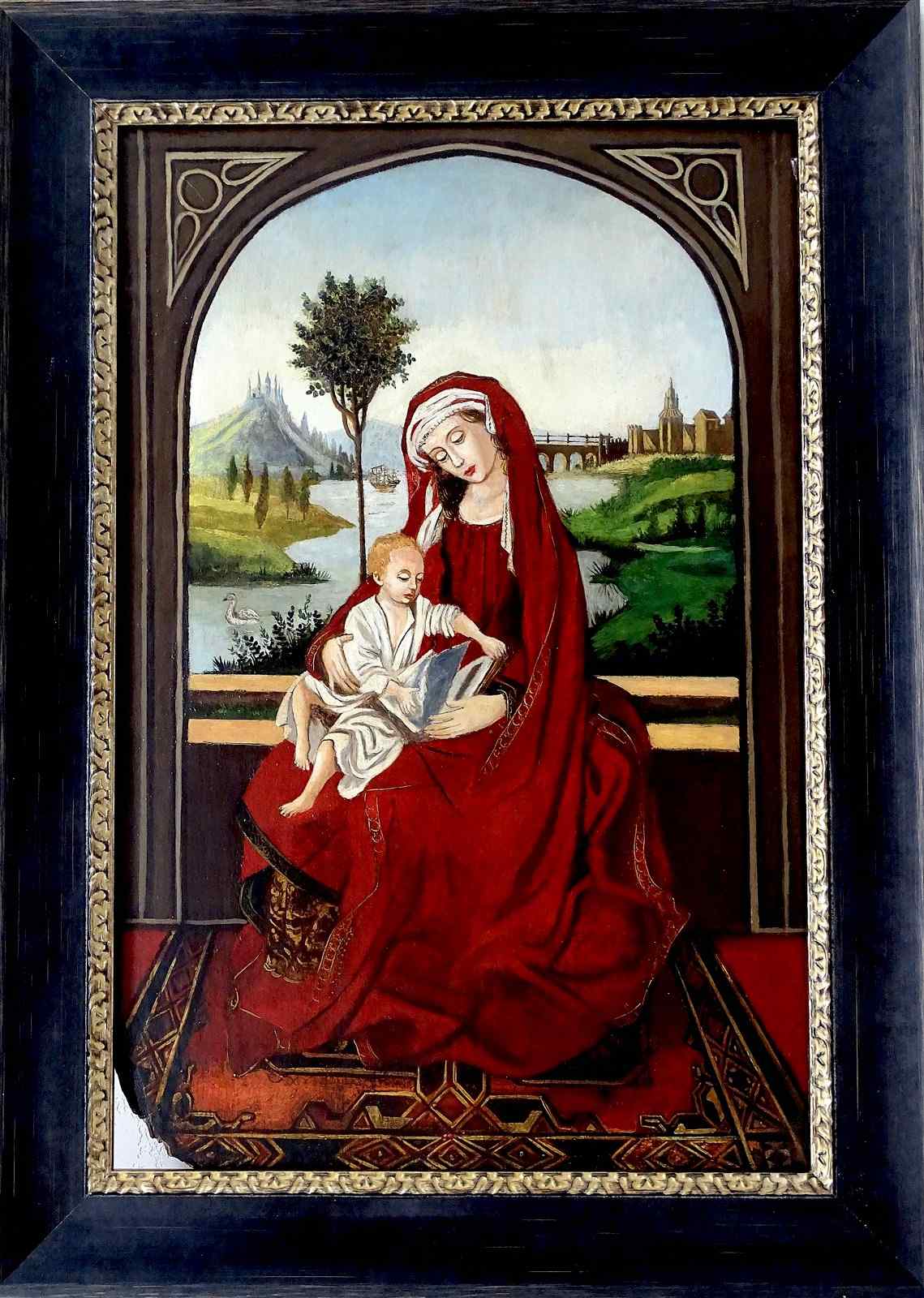 Dutch school from the end of the 16th century,

and in the taste of the Dutch primitives of the 15th century,

Representing a Virgin and Child with an Open Book,

in a countryside landscape.

Oil on very thick Walnut panel, a single board, not parqueted,

Cleaned in our workshops, no visible repainting.

Madonna Durán (also known as Madonna in Red or Madonna and Child in a Niche or Madonna on a Throne) is an oil painting on oak panel, completed between 1435 and 1438 by the Dutch painter Rogier van der Weyden. The inspiration for this painting comes from Jan van Eyck's Ince Hall Madonna and has been widely imitated afterwards, such as the Madonna leggente. Now at the Prado, in Madrid, it depicts a seated and calm Virgin Mary, dressed in a long, flowing red dress, edged with golden thread. The infant Jesus is seated on his knees, playfully leafing through a sacred book or manuscript on which the eyes of the two figures rest. But unlike van Eyck's treatment, van der Weyden not only positions the Virgin and Child in a Gothic apse or niche as he had his first two Madonnas (the standing Madonna and the Madonna and Child enthroned), but the also placed on a projecting plinth, further accentuating their sculptural impression.

Christ appears much older than in most contemporary paintings of this genre. He is far from an infant and is rendered very realistically. He is shown as a small child, without the gentleness of the usual 15th century depictions of the Madonna and Child. The painting is characterized by the sculptural aspect that van der Weyden often favored and by its similarity in coloring with the s. 1435 Descent from the Cross (Madrid) and c. 1442–14 Altarpiece of Miraflores (Berlin).

The painting was acquired by Pedro Fernández-Durán in 1899 at the Palacio de Boadilla, Madrid. He donated the work to the Museo del Prado in 19304.

Mary is depicted in a long red hooded dress and white headdress, with the Baby Jesus in a white shirt sitting on her lap. He flips curiously and crumples the pages of a book on his mother's lap. The book is placed in the very center of the panel, symbolizing the centrality of the divine Word in Christian belief. According to the Prado Museum, the book itself represents an allusion to "the Holy Scriptures which announce the redemptive mission of Christ". An angel in a dark gray robe hovers above Mary's head, holding a pearl-encrusted crown intended for her at the time of her accession to the Queen of Heaven. Marie's long dress swirls around the pictorial space, obscuring her throne and eventually falling onto the support by her feet. They are framed by a niche or apse carved with Gothic interlacing similar to those found in van der Weyden's Descent from the Cross. The curved arches of the niche echo the lines of her figure as she leans protectively over the child. These curved lines and warm colors give the work its sense of harmony.

The analysis from the beginning to the middle of the twentieth century placed little emphasis on the advanced age of Christ for a work "Virgin and Child" from this period. Neither did he stress the importance of the manuscript or the rough way in which Christ seems to leaf through it energetically, its play watched by an almost indulgent Mary. More recently, art historians such as Alfred Acres have questioned the importance of freedom of movement and the naturalistic portrayal of the child in such a deliberately elegant and balanced work, especially in the work of 'a painter as self-aware and involved in composition as van der Weyden. Acres believes that the book is central to understanding painting, and notes its perfect centrality in the panel; it is the center of the eyes and the hands of the characters, and Christ apparently flips through the pages backwards, towards the beginning. As Christ's right hand holds a number of curled scrolls together and pays no attention to them, his more careful left hand is about to open the lower left corner of the open page. If it is reasonably assumed that the open book in Mary's lap is facing her, it appears that the child is leafing through the pages backwards. While the holy books